I, Abner Hanner, Sheriff of the county of Guilford and state of North Carolina by virtue of an execution to moderated from the county court of Guilford for the satisfaction of a judgement which Nathan Patterson lately in the Sd. court recovered against Aaron Wallace and William Wallace and in consideration of the sum of two hundred dollars to me in hand paid by Charles B. Harris of the county of Guilford aforesaid have by and in virtue of my sd. office and by authority of the said execution bargained, sold and delivered unto the Sd. Charles B. Harris he being the last and highest bidder at the price aforesaid a negro girl named Betsy leveed upon and sold at public sale as the property of William Wallace one of the defendants in the aforesaid execution and I do further in the character and by virtue of my authority as sheriff as aforesaid undertake and hereby engage to warrant and defend the title of the aforesaid negro girl unto him the said Charles B. Harris his executors, administrators given under my hand and seal this 24th day of February AD 1820 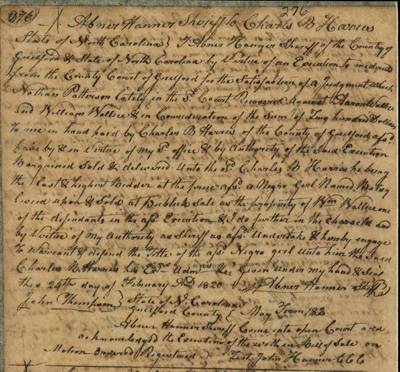