Know all men by these presents that I, William Armfield, Sheriff of the county of Guilford by virtue of an execution issuing from the county court of Guilford wherein Abner Wiley assignee and was plaintiff and Andrew Patrick did on the sixteenth day of February AD 1821 expose to sale in the town of Greensboro a negro girl slave named Phillas the property of the Sd. Andrew Patrick at which time and place Isaac Beeson of the county of aforesaid became the last and highest bidder at the sum of two hundred and fifty eight dollars. Now those know ye that I, William Armfield, Sheriff, as aforesaid for and in consideration of the above mentioned sum of two hundred and fifty eight dollars to me in hand paid by Isaac Beeson, the receipt whereof is hereby acknowledged, have granted bargained and sold to the Sd. Isaac Beeson the aforesaid negro girl slave named Phillas to have and to hold the Sd. Phillas to him the Sd. Isaac Beeson his heirs and executors administrators and assigns forever and I the Sd. Will Armfield, Sheriff, as aforesaid for myself my heirs to the Sd. Isaac Beeson his executors administrators and assigns will warrant and defend the title of the Sd. negro girl Phillas insofar as my office of Sheriff will admit and no further. In testimony whereof I have hereunto set my hand and seal this 21st day of February AD 1821 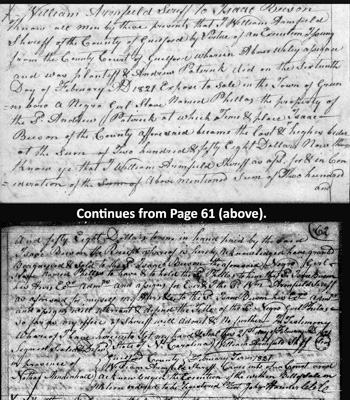