Know all men by these presents that I, John M. Morehead by virtue of a deed of trust to me executed by Joseph Davis and his wife Sally dated 11th November 1822 and of record in the County of Guilford N.C. for the purpous therein specified have his day recording to the terms of Said Trust, Bargained and Sold unto William Ryan (Executor of John Hamilton Deceased and Trustee for Sally Davis) two negroes to wit Jane a woman aged about thirty two years at the price of three hundred and nineteen dollars also Jacob a boy aged about eight years at the price of two hundred and fifty one dollars, which said sumes together amounts to five hundred and seventy dollars paid to me by William Ryan out of the interest which he had in his hands under the will of John Hamilton Decs.' For the use and exclusive benefit of Sally Davis as her Trustee. The receipt whereof is hereby acknowledged and I do hereby convey and transfer unto the said William Ryan all the right title and interest which vested in me, to said Negroes by virtue of said Deed of Trust-Witness my hand and Seal this 18th November 1824. 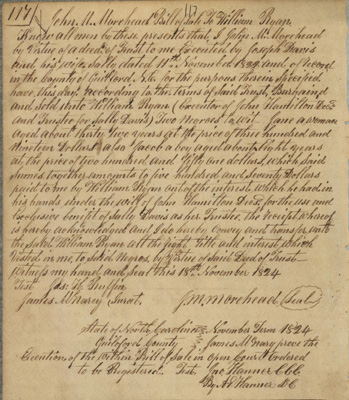