RUNAWAY From the Subscriber near Tarborough, about the 20th inst. A NEGRO MAN named DAVEY, of a yellow Complexion about 20 Years old, about 5 Feet 8 Inches high, thin made has an Impediment in his Speech, and puts his Fingers to his Cheeks when he speaks; two of his Teeth on one Side of his Mouth, and one on the other are indented; has a Scar on his Head from a Blow, and is rather knock-kneed; his Kuckles on both Hands are marked by being frost-bitten. When he went off he had on a long-waisted blue Coat. He was purchased at Aversborough a few Days before, of a Person calling himself Edward Davis of Warren County. Whoever shall apprehend the said Negro, and lodge him in any Goal, and give Notice to the Subscriber, or Arthur Bell, at Norfleet's Ferry, on Roanoke, 22 Miles below Halifax, shall receive a Reward of twenty five Dollars, and all reasonable Expences paid. JAS.[James] B. BRYANT. Halifax County, May 24th, 1805. 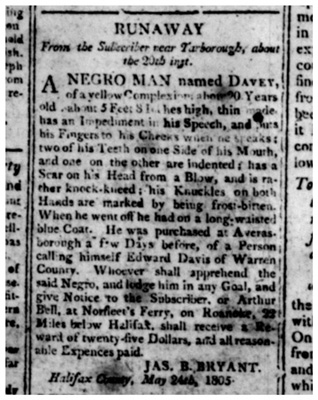