Ran Away, From the subscriber, about the 1st of the present month (July) a negro man named KINCHEN,--about 20 years of age, 5 feet 6 inches high; of a dark complexion and down look when spoken to, tolerably bushy head, spare made, a small scar on his right arm near the wrist. He is inclined to stutter and his back marked, occasioned by the lash. The said fellow ran away some time before that, and was taken up and confined in Warrenton Jail; he presented a paper which he thought was a free pass, but it proved not to be so. I think it probable he may endeavor to get another. I bought him some time in February last, from Mr Robert L. Marshall, living four or five miles above the town of Halifax. I will give a reward of $15, if taken in this state and confined in jail so that I get him again, or $25 if taken out of the State. Also, Ran Away, A negro woman named PLEASANT, about 28 years of age, common size, round face and tolerable dark complection[sic], with a yellow spot on the left cheek. It would appear from looking at her under teeth, that she had lost one from about the middle of them, but has not. She had been run away about three years and was apprehended and brought home some time in February last, remained a few days and went off again. She has been in the habit of lurking about Johnson's quarter, on Roanoke river near Pollock's Ferry. I will give a reward of $15 if taken and confined in any jail in this state, so that I get her again, and $20 if taken out of the state. JACOB POPE. Halifax county, nine miles below the town of Halifax. July 28, 1826. 32-3t 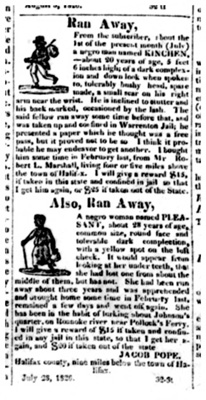