One hundred and ten pounds reward

Newbern, February 20, 1775. ONE HUNDRED AND TEN POUNDS REWARD. ABSENTED themselves very early on Sunday morning the 19th Insant, from the House of the Subscribers, Five newly imported Slaves, (FOUR Men and One Woman:) Two of the Men, named Kauchee and Boohum are Six Feet One or Two Inches high, and about 30 Years or Age; another named Ji, is near Five Feet Nine Inches high, and about 25 Years of Age, has sore Eyes; and the Fourth, named Sambo Pool, is a short well set Fellow, aged 18 Years; the Woman, named Peg Manny, is of short Stature and elderly. The Fellows were uniformly clad in coarse green Cloth Jackets, brown Cloth Trowsers, a Blanket, and red Cloth Cap; and the Wench had on an ambross'd Flannel Petticoat and brown incapable of uttering a Word of English, have been inveigled away by some infamously principled Person, of a fairier Complexion, but darker Disposition than theirs. Whoever, therefore, secures the said Negroes for their Owners, and the Person or Persons so inveigling them, or facilitating their Escape, provided that he or they be convicted thereof, shall receive the above mentioned Reward of One Hundred and Ten Pounds, Proclamation Money, or Fofty Shillings for each of the Slaves. EDWARD BATCHERLOR &amp; CO. ALL Masters of Vessels, Boatmen, and others plying by Water, are forbid to give them Passage at their Peril. 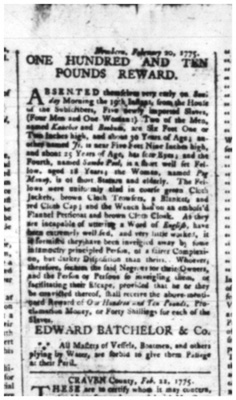