ROWAN county, Oct. 13, 1769. RN away from the subscriber on the third day of September last, three outlandish negroes, viz. One likely negro fellow named JACK, about 26 or 27 years old, about 5 fet 6 inches high, well set, of a pleasent counterance, and has a scar on his left breast, where he has some incisions made to cure him of an inward disorder, he has also some of his country marks on his face. One other negro fellow named ARTHUR, about 30 years old, having ugly feet, that stick out very much, which occasions him to halt as he walks: A negro wench named RACHAEL, about 30 years old, very well featurted, and not very black; there went with them a negro wench named PHILLIS, belonging to Mr. George Magoune; she is wife to the above named negro Jack. Whoever takes up said negroes, and delivers them to me in Salisbury, shall have FORTY SHILLINGS, reward, and all reasonable charges, paid by FRANCIS LOCK. 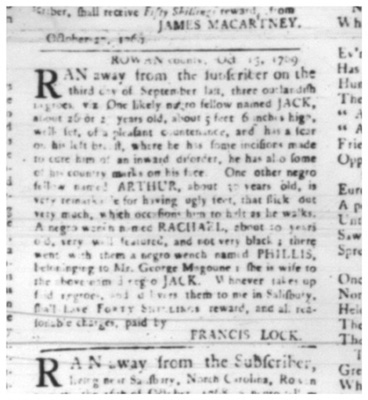