CRAVEN COUTNY, ss. By JOHN HAWKS, and LANCELOT GRAVE BERRY, Esquires, Two of his Majesty's Justices of the Peace for said County. WHEREAS Complaint hath been made to us, by James Biggleston, that a Negro Slave belonging to him, named JEM, about 28 Years of Age, a stout likely Fellow, about 5 Feet 7 Inches high, and is Country born; had on when he went away, a light coloured milled Duffil Jacket and Breeches, and check Shirt, hath run away from his said Master, and is supposed to be lurking about, doing Acts of Felony in this Province. These are therefore in his Majesty's Name, to command the said Slave forthwith to surrender himself, and return home to his said Master. And we do hereby command the Sheriff of the said County of Craven to make dilligent Search after the above-menionted Slave, and him having found, to apprehend and secure, so that he may be conveyed to his said Master, or otherwise discharged as the Law directs; and the said Sheriff is hereby impowered to raise and take with him such Power of his County as he shall think fit for apprehending the said Slave. And we do hereby, by virtue of an Act of Assembly of this Province concerning Servants and Slaves, intimate and declare, if the said Jem doth not surrender himself, and return homeimmediately after the Publication of these Presents that any Person or Persons may kill and destroy the said Slave, by such Means as he or they shall think fit, without Impeachment or Accusation of any Crime or offence for so doing, or without incurring any Penalty or Forfeiture thereby. GIVEN under our Hands and Seals, this 3rd day of May, 1775, and in the 15th Year of his Majesty's Reign. JOHN HAWKS, L.G. BERRY. N.B. The above Negro Slave is supposed to be harboured or kept out by his Wife, anmed Rachel, a Wench belonging to Mr. Isaac Vonvielle, and it is very possible he is lurking in the Neighbourhood of his Plantation. Whoever will take him up and bring him to me, shall receive a Reward of three Pounds for his Trouble. JAMES BIGGLESTON. 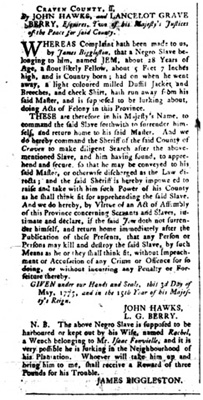