For the Consideration of Two Hundred and Sixty Dollars in hand of the recipient whereof I hereby acknowledge. I Henry Harrison by these presents have bargained, sold, and delivered to James Nelson a certain Negro girl slave aged six years old called and known by the name of Lear. To have and to hold to the said James Nelson his heirs and assigns he the same Henry Harrison doth by these presents grant that he will for himself his Heirs and assigns all and every other person Warrant and forever defend the Title of the aforesaid Negro Slave to the said James Nelson his heirs and assigns forever. In witness whereof the said Henry Harrison hath hereunto set his hand and seal this 19th day of June 1818. 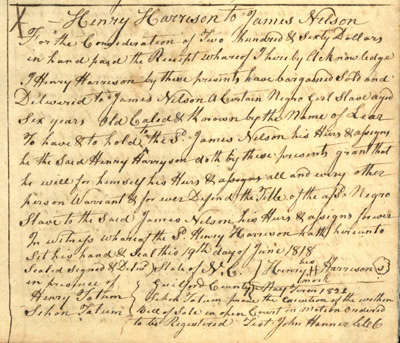