County of Guilford and State of North Carolina of the first part and John M. Dick of the County and State aforesaid of the other part witnesseth whereas the Said John Slade is indebted to one Henry Mason of the Town of Hallifax State of North Carolina in the sum five hundred and twenty three dollars and six cents with legal interest on the same from the 31st day of January 1820 Due by a bond which the S. John Slade executed to Andrew C. Hughman and company for the sum of six hundred and twenty four dollars and seventy four Cents on the 8th day of May AD 1819 and payable six months after date said bond has a payment endorsed on the 31st day of January AD 1820 of one Hundred and Ten Dollars of the said bond has been duly transferred by the S. Andrew C. Hegeman and Company to the S. Henry Mason and the S. John Slade being honestly Desirous to secure the payment of the said debt to the said Henry Mason Therefore. In consideration of the Debt so due as aforesaid and the further sum of Consideration of One Dollar paid John Slade in hand paid by the S. John M. Dick at and before the sealing and delivering of these presents he the Said John Slade hath and hereby doth grant bargain sell and convey unto John Slade M. Dick and his assigns

for ever two Negro men slaves named Dick and Thornton the Said Negro man slaves Dick is of the age of 23 years and the said Thornton is 19 years of age to have and to hold the aforesaid negros Dick and Thornton to the Said John M. Dick his Executors administrators and assigns for ever the aforementioned Deed of Conveyence is never the Less in Trust and Confidence that the S. John M Dick shall be possessed of the aforementioned Negroes herein Conveyed of the sole and only proper use purpose of assuring the payment of the said debt to due as aforesaid to the said Henry Mason and If the Said sum of the $523-6 cents with legal interest on the same from the 31st Day of January 1820 shall remain in the whole or in part unpaid by the said John Slade or otherwise to the S. Henry Mason on the first day of November in the year of our Lord 1821 then it shall be lawfull for the said John M. Dick having first made public advertisement for ten days at the court house doors in the town of Greensboro to cause the said Negroes Dick And Thornton herein Conveyed to be publick by sold to the highest bidder for ready money and that the moneys arising from the said Sale or the amount of the said Debt all reasonable expenses incurred by the said sale to reserve hold and retain for the use of S. Henry Mason. In testimony whereof we have hereunto set our hands and seals the day and year above written. 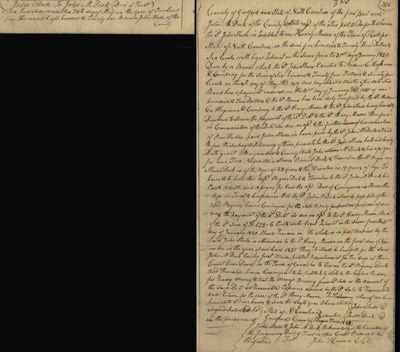