This indenture made and entered into this 23 day of September in the year of Our Lord 1821 between John Slade of the county of Guilford and State of North Carolina of the first part John M. Dick of the county and state aforesaid of the second part and Andrew Lindsey of the like County and State of the third and last part. Witnesseth that whereas the stated John Slade is justly indebted to the said Andrew Lindsey as Executor of Robert Lindsey Dee in the sum of two hundred and fifty dollars due by bond with interest and also as the further sum of two hundred and fifty dollars as guardian for Robert W. Lindsey which debts are now due and payable and the said John Slade being desirous to serve the payment thereof. Now therefore in consideration of the S. debts so due to the said Andrew Lindsey as well for and in consideration of one dollar by the S. John, M. Dick in hand paid the receipt whereof is hereby acknowledged he the said John Slade hath and hearby doth bargain, sell and transfer unto the S. John, M. Dick, the one seventh undivided part share and interest of in and to the following negros Slaves Jomer Lucy, Chares Sylvia, Peter Wise, Sarah, Isaac, David, Alfred, Jeffrey, Jelse, Brandon and Horace to bring the part share and interest of and to the negros aforesaid which the S. John Slade is entitled to by his intermarriage with Henrietta Lindsey, the widow of the S. Samuel Lindsey Dee and the said John Slade doth hereby warrant and covenant to defend the right and title of the S. John Dick of and to the interest aforesaid in and to the above named negros to have the said John M. Dick, his executors, administrators and assigns The trust and confidence never the less that the S. John M. Deck shall have and hold the interest aforesaid for the alone purchase intended to satisfy and pay unto the S. Andrews Lindsey the aforesaid debt so due from the said John Slade and he the S. John M. Dick in execution of the S. trust confidence and authority hereby reposed in him doth hereby covenant to and with the said Andrew Lindsey and John Slade that of the stated debts or any part thereof shall and remain unpaid and satisfied to the S. Andrew Lindsey at the expiration of nine months from the date hereof then that he the S. John M. Dick at the request of the said Andrew Lindsey and having first advertised for ten days at the courthouse in the town of Greensboro and three other public places in the county of Guilford shall and will proceed to sell make sale upon such terms as the S. Andrews shall direct of all and singular the claim and interest of the S. John Slade in and to the above named negro slaves and the S. John M Deck doth furthermore agree after deducting the costs and expenses encedent to the execution of these trust to apply the proceeds of said sale to the extinguishment of debts or such part thereof as may then remain due and unpaid Witness out hands and seals this 23 day of Nov. 1821. State of North Carolina, Guilford County 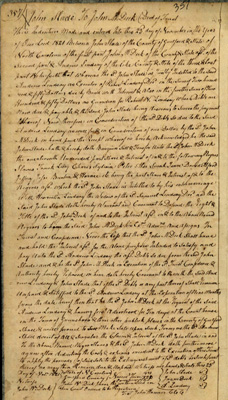