Know all men by these presents that William Thing of the county Guilford and state of N. Carolina for and in consideration of the sum of four hundred and seventy five dollars to me in hand paid by Mary Cunningham of the county and state aforesaid have bargained and sold and by these presents for bargain and sell to the sd. Mary Cunningham a negro woman named Annica and her youngest child named sally to have and to hold the said two negroes to her the said Mary Cunningham and to her heirs and I the said William Thing do covenant and agree to and with the sd. Mary Cunningham to warrant and defend the titled of the sd. two negroes to her against the lawful claim or claims of all persons whatsoever in witness whereof I have hereunto set my hand and seal this 26th of November 1821. 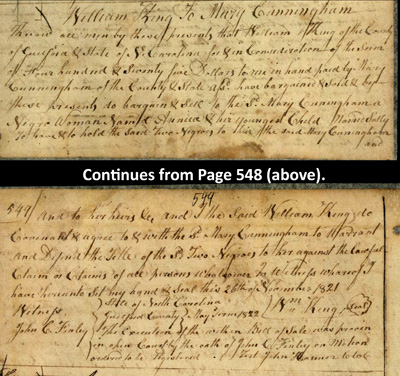