This indenture made and indented this 23rd of July 1807 between James Cannon of the one part of the County of Guilford and State of North Carolina and William C. Love of the same county and state of the other part. That whereas the said James Cannon stands largely indebted to John Thompson of the county and state before mentioned that is to say in the great and full sum of 662 dollars money of the United States and is divisions to severe the sand with the interest that may grow due thereon. In consideration in consideration whereof and the sum of five shillings to him in hand paid by the grantee William C. Love be the Grantor James Cannon hath to granted bargained and sold and made over and by these presents cloth give grant bargain ...and confirm make over to the grantee William C. Love and to his heirs and assigns all that lott or parcel of land lying and being in the town of Martinelli and County of and number in the plan of said to you. No. 1 bring the same lott which the said James Cannon pure of the above mentioned. John Thompson with all the ... thereon and all the appurtenances thereinto belonging also one Nigrow woman slave named Lucy and her child with all her future heirs and all his stock of hogs, cows, and horses together with all his house hold furniture now in his possession to have and to hold the S. Lott of parcel of land with the appurtenances and the said Negro Lucy and Child with the stock of horses cows and hogs and the house hold furniture to William C. Love and to his heirs and assigns for ever. In trust never be left to and for the following use that is to say that if the grantor James Cannon shall fail to pay the said sum of six hundred and sixty two dollars with the interest arising thereon from the date of this indenture on or before one twelve month from the 25th day of December next it shall and may be lawful for the said William C. Love his heirs or assigns or certain attorney after owing 10 days public notice to sell and dispose of for ready money the aforesaid property or to much thereof as will be sufficient to pay the debt and interest and to pay the money so required to the (title) John Thompson sent his heirs or assigns and the property unsold after the amount of the aforementioned debt with interest is raised to release to the (title) James Cannon and to his heirs and assigns and should the (title) James Cannon his heirs or assigns pay to John Thompson his heirs or assigns the sum of $662 with interest. ... on or before one twelve month from the 25th day of December next then and in that case this deed shall cease, determine, and become void in testimony whereof the beforementioned James Cannon hath hereunto set his hand and seal this day and year before mentioned. 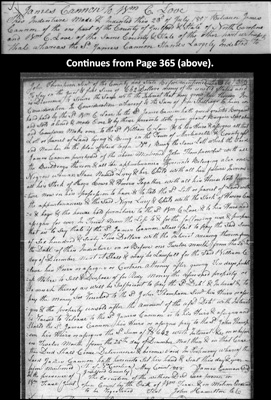